A Conversation with Neel Kashkari

The NACD Minnesota Chapter welcomed Neel Kashkari, president and CEO of the Federal Reserve Bank, Minneapolis. For directors, it is important to understand trends in the global economy and our financial system that could affect your company’s business decisions and performance.

Kashkari offered an overview of the Federal Reserve and, as a member of the Federal Open Market, shared thoughts on the economic outlook. After the opening remarks, Dr. King Banaian joined Kashkari for a conversation. Audience Q&A following the conversation and addressed questions relating to corporate governance. 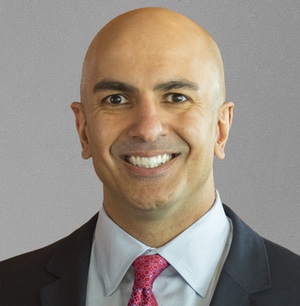 Neel Kashkari took office as president and chief executive officer of the Federal Reserve Bank of Minneapolis on January 1, 2016, following a national search conducted by the Bank’s independent board of directors.

In this role, he serves on the Federal Open Market Committee, bringing the Ninth District’s perspective to monetary policy discussions in Washington, D.C. In addition to his responsibilities as a monetary policymaker, Kashkari oversees all operations of the bank, including supervision and regulation, treasury services and payments services. He has also been instrumental in establishing the Opportunity & Inclusive Growth Institute to promote greater economic equity.

Committed to increasing transparency at the Fed, Kashkari has published in the Wall Street Journal, Washington Post and Financial Times and is active on Twitter and Instagram. He also serves on the board of the Economic Club of Minnesota and as a member of the Aspen Economic Strategy Group.

From 2006 to 2009, Kashkari served in several senior positions at the U.S. Department of the Treasury. In 2008, he was confirmed as assistant secretary of the Treasury. In this role, he oversaw the Troubled Assets Relief Program (TARP) during the financial crisis. Kashkari received the Alexander Hamilton Award, the Treasury Department’s highest honor for distinguished service.

Following his tenure in Washington, Kashkari returned to California in 2009 and joined PIMCO as managing director and member of the executive office. He left the firm in 2013 to explore returning to public service and, in 2014, ran for governor of California on a platform focused on economic opportunity.

Raised in Ohio, Kashkari earned his bachelor’s and master’s degrees in mechanical engineering at the University of Illinois at Urbana-Champaign and his MBA from the Wharton School at the University of Pennsylvania. He lives with his wife, Christine, daughter, Ulysses, and Newfoundland dogs - Winslow, Webster and Newsome - in Orono, Minnesota.

King Banaian is dean of the School of Public Affairs at St. Cloud State University. He is also a professor in the Department of Economics at SCSU. He holds the Ph.D. in economics from the Claremont Graduate School.

He is author of The Ukrainian Economy since Independence (Edward Elgar, 1998), co-editor of The Design and Use of Political Economy Indicators (Palgrave, 2008) and more than forty articles and book chapters discussing monetary policy and political economy. He has served as a consultant to central banks and governments in several developing countries.

King was state representative in the Minnesota House for District 15B, 2011-13. He is also host of the King Banaian Show on Business1440 KYCR broadcast in Minneapolis, and co-author of the St. Cloud Quarterly Business Report. He lives in St. Cloud, Minnesota, with his wife Barbara.